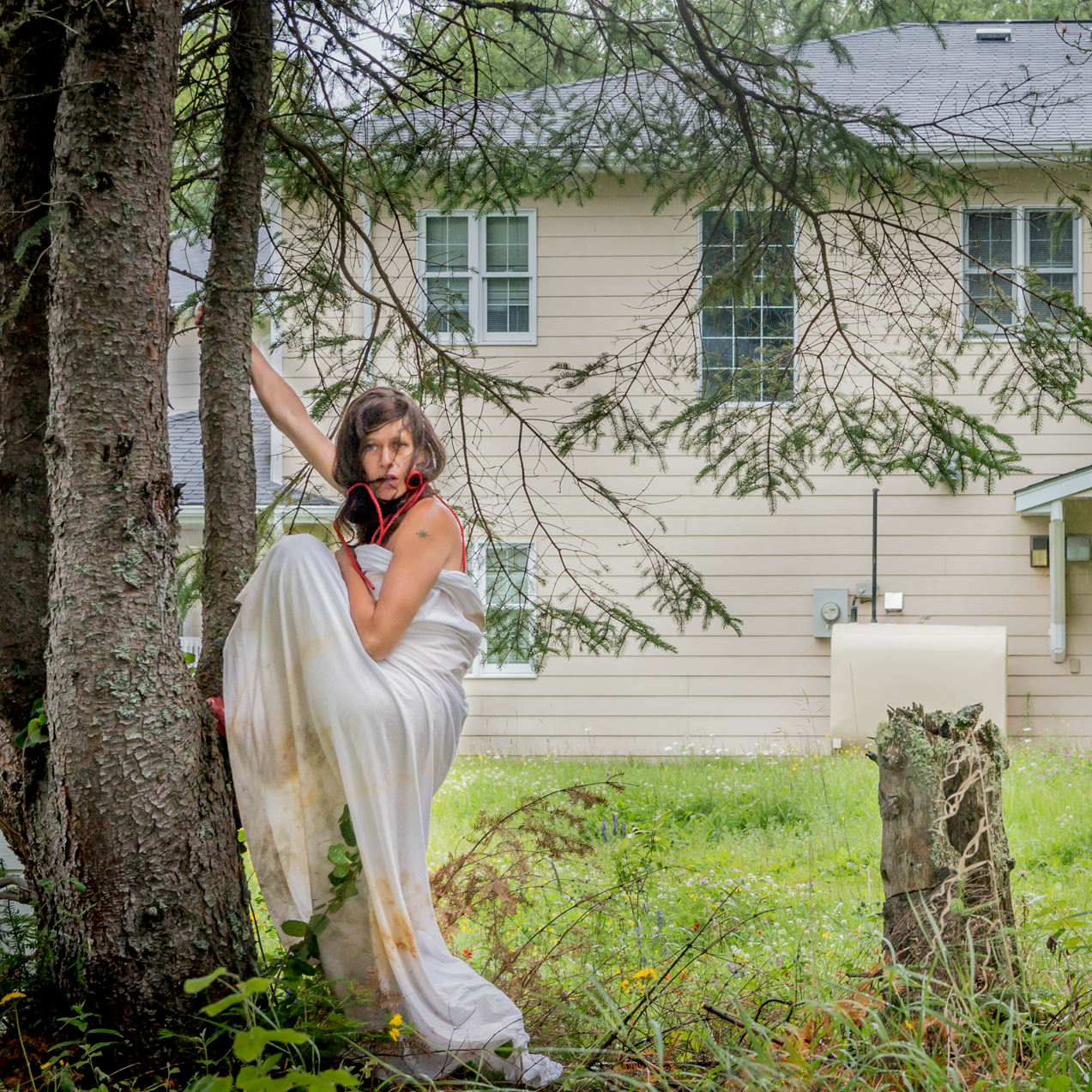 In partnership with Champlain College and Gzowski College, Political Studies and Chanie Wenjack School of Indigenous Studies, Artspace Gallery, Traill College, and Public Energy, Bodies in Translation was thrilled to co-host Trent University’s 40th Annual Ashley Fellow Artist In Residence Lara Kramer.
During the two-week residency, Kramer presented the immersive installation Phantom, stills & vibrations at Artspace. In addition to the installation, Kramer hosted a series of free workshops, teachings and lectures that were open to all members of the public.

Phantom, stills & vibrations creates an intimacy with the north (Lac Seul, ON) and confronts the brutal and complex relationships between Indigenous peoples and Settler society. For this performance and sound installation, Kramer draws the spectator into an immersive experience of the former Pelican Lake Indian Residential School, where three generations of her family attended. Produced in collaboration with Stefan Petersen, Phantom stills & vibrations explores the residual effects of the Residential school system and the continuing trauma that permeates the landscape.

Lara Kramer’s work is intimately linked to memory, examining issues of social, political, cultural importance for Canada and First Nations Peoples. Her ground-breaking work Native Girl Syndrome (NGS) grapples with experiences of Indian Residential Schools which are prominent in her family’s history. In addition to NGS, she has created several feature length performance pieces (e.g. Tame, Of Good and Moral Character, Fragments) to critical acclaim that explore family and personal, complex, multilayered experiences, including from Indian Residential Schools and street life. These experiences speak to assimilation, cultural disorientation, confinement, survival, and human connection. Her works have been presented in Montreal, Ottawa, Peterborough, Rama, ON, Toronto, Regina, Edmonton, Banff, Vancouver, and Australia, gaining her recognition as an important Indigenous voice in Canada. She has been artist-in-residence across Canada and was also faculty of the Indigenous Dance Residency at The Banff Centre. She has been featured more than once in The Dance Current, Canada’s national dance magazine.

I met Lara in 2015 when she presented Tame at Market Hall in Peterborough to a full house and resounding warm and enthusiastic reception. Trent students and community, Indigenous and non-Indigneous, will be drawn to Lara for her warm personality and meaningful connections she makes with each person she meets. More than this, she explores the relationship between environment, experiences, and embodiment to create greater awareness and potential for expanded understanding of oneself, the social and political. I took a movement workshop with Lara (State of Body Performance workshop) after the performance of Tame. In the workshop, she facilitated greater awareness of the body in space, including sensorial awareness (especially aural) that, for me, opened onto new and multiple vistas of self-understanding of past, present, and future. I believe that there would be great interest among students and community artists in her proposed workshops to explore the relationship between memory, body, and agency, to process their own individual and social experiences, as well as to inspire growth and creativity.

Public Artist Talk, Discovery of State of Body Workshop and Reception
No dance experience required or expected
7:00pm to 9:00pm
Bagnani Hall, (followed by a Reception in the Senior Common Room) Traill College

Grand Opening of Elders Gathering
4:00pm to 6:00pm with highlights from all Elders Gathering presenters
Gzowski College, Room 114. Registration and information at webpages below.

Opening of Phantom, stills & vibrations, 12:00pm
Artist performance at 1:30pm and 3:30pm with reception after the last performance. Open to the public. Written and audio description was available.
Artspace Gallery, 378 Aylmer St. N. (between Hunter and Simcoe).

Closing of Phantom, stills & vibrations with performance followed by reception
7:00pm to 10:00pm, Open to the public. Written and audio description will be available.
Artspace Gallery, 378 Aylmer St. N. (between Hunter and Simcoe).

Lara Kramer is the artistic director and choreographer Lara Kramer Danse (Montreal). Kramer is an Oji-Cree (Ojibwe and Cree) choreographer and multidisciplinary artist whose work is intimately linked to her memory and Aboriginal roots. She received her BFA in Contemporary Dance at Concordia University. Working with strong visuals and narrative, Kramer’s work pushes the strength and fragility of the human spirit. Her work is political and potent, often examining political issues surrounding Canada and First Nations Peoples. Kramer has been recognized as a Human Rights Advocate through the Montreal Holocaust Memorial Centre. Her work has been presented widely across Canada and abroad to Australia. Kramer’s works have been hailed by critics, these include Fragments (2009), inspired by her mother’s stories of being in residential school, and Native Girl Syndrome (2013), which exposes the marginalization and victimization of Indigenous women and the effects of cultural genocide. In 2017 the installation and performance piece This Time Will be Different, created in collaboration with Émilie Monnet, denounced the status quo of the Canadian government’s discourse regarding First Nations and criticized the “national reconciliation industry”. Phantom Stills & Vibrations (2018), created in collaboration with Stefan Petersen pulls the spectator into the former Pelican Falls residential school near Sioux Lookout, Ontario where three generations of her family attended.

The Ashley Fellowship is funded by a bequest from the late Professor C.A. Ashley, longtime friend of Trent University and an enthusiastic proponent of the role which the informal contacts of College life can play in the academic pursuits of the University. The Ashley Fellow is therefore a visiting scholar who is a resident guest in one of Trent’s residential Colleges. By the terms approved by Senate in 1976, and in keeping with Professor Ashley’s wishes, “scholar” should be broadly interpreted to include persons not necessarily holding an academic appointment.

This image shows the grounds of the former Pelican Lake Indian Residential School. Artist Lara Kramer is standing at the base of a tall conifer tree. Kramer is looking into the distance to the right with a frightened expression in her eyes. She is wrapped in a white sheet at her chest that drapes below her feet and which has dirt and red stains at the hem. She is grabbing the tree with her hand, extending her arm above her head. Her other arm is bent with her elbow resting in the crease of her left thigh. She prepares to mount the tree with her leg bent and foot in the crease of the tree. Her other food is on the ground. She is standing amidst thigh high tall plants. There is a red string wrapped around her left foot that travels up her arm, lower jaw, shoulder, and upper back. There is a white two story building behind her, and another two story yellow building in the near distance. There is a tree stump to the right of Kramer. 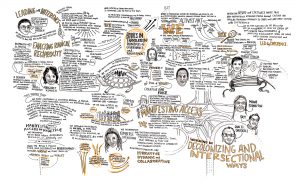 Principles of Governance and Engagement (PDF)